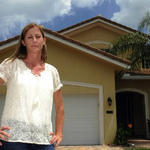 Those numbers provide yet more evidence of the turnaround in South Florida's housing market, which crashed harder than most in the recession. Thousands of homeowners lost equity when prices nose-dived after a historic run-up from 2000 to 2005.
Read more on Sun Sentinel

South Florida home prices rise in 2014 even as market cools

When the property's caretakers searched it soon afterward, they found prepaid disposable cellphones and bank wraps for $ 10,000 scattered about, along with a bank statement in the name of Harvey Thompson showing a $ 1 million balance, a real estate agent …
Read more on MiamiHerald.com

You need to log in to use member only features.